Wood County, TX  & Other Areas of the East Texas

Earlier this year the water level at Lake Fork Reservoir was lowered to an elevation of approximately 397‐ft to make repairs and further assess soil cement along the upstream side of the Lake Fork Dam. Further inspections were conducted by divers and revealed submerged areas below elevation 397 that were also in need of repair. A two phased approach was conducted to repair the above water and below water repairs.

All above water repair work has been completed and as of this press release the SRA will no longer hold the reservoir at elevation 397. The rate of rise of the lake will depend on rainfall and inflow from upstream tributaries. Underwater repair work will continue for the foreseeable future but can be conducted as the reservoir is allowed to fill.

LOCATION
This project is located on Lake Fork Creek, a major tributary of the Sabine River, about 5 miles west of Quitman, Texas, about 70 miles east of Dallas, Texas.   The Lake Fork Division of the SRA  is responsible for the Lake Fork Dam and Reservoir Project.  Lake Fork is geographically located in Wood and Raines County.

HISTORY
The reservoir, owned an operated by the Sabine River Authority of Texas, inundates land in Wood, Rains, and Hopkins Counties. Preliminary engineering studies for the Lake Fork Reservoir Project were initiated in November, 1972. Construction work on the project began in the fall of 1975. Final closure of the dam was made in February, 1980, and conservation pool level was reached in December, 1985. A total of 41,100 acres of land were acquired for the project. Lake Fork Reservoir has an estimated surface area of 27,690 acres at conservation pool elevation 403.0 feet above mean m.s.l. (mean sea level) and extends up Lake Fork Creek about 15 miles.

WATER USE.  WHO USES THE WATER?
Construction of the Lake Fork Reservoir was funded through a water supply agreement with several corporations, including Texas Utilities Generating Company, Inc., now Luminant, to provide water for municipal and industrial uses. Several municipalities, as well as water supply corporations and industrial and agricultural interests, have contracted for purchase of water from the reservoir. The reservoir's storage capacity at the 403 foot m.s.l. conservation pool level is 675,819 acre-feet with a minimum firm yield of 188,660 acre-feet per year.


A SECONDARY BENEFIT OF LAKE FORK IS TOURISM AND ECONOMIC IMPACT:  FISHING
Lake Fork Fishing opportunities have been particularly good due to fishery management efforts of the Texas Parks and Wildlife Department who began stocking the reservoir with Florida largemouth bass in 1978.   The Sabine River Basin is made up of all or part of 21 counties, covers a large portion of east Texas.

Request for Water
For specific details on water availability, contact the Sabine River Authority of Texas, (409) 746-2192. 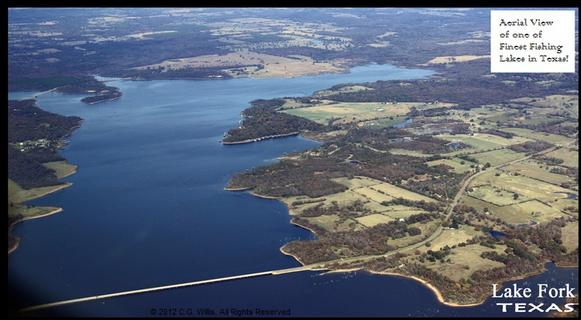 In the Counties of

​
Location: On the Sabine River in Hopkins, Rains and Wood Counties, 5 miles northwest of Quitman, between the towns of Alba, Emory, and Yantis.  (There is no incorporated city called "Lake Fork, Texas"; the Lake covers a large geographical area near several towns.)